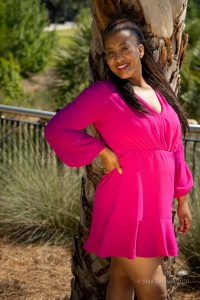 Miriam is originally from Memphis, Tennessee. She started dancing at 3 years old.  Her first dance class was ballet. At her first ballet recital, she sat down at the edge of the stage instead of performing. Thus, her Mom thought she didn’t like to dance so she enrolled her in piano lessons.  She thought this would help her hear music and begin to increase her understanding of tones.  In Junior High, she chose dance and transitioned to jazz and modern dance.  During High School she joined a Majorette squad at her local high school and reached the rank of Head Majorette before graduation.  She had also taken up the xylophone and the harp as other instruments.  When she moved to Florida to attend college, she thought it was odd that there was not a dance team performing with the band so she started her first dance team Spring of 1994 at FAMU called Venom Dancers.  The dance team incorporated jazz, modern, hip hop, and majorette styles of dance.  It is still on campus today.

After graduation, she took a little hiatus from dancing to determine how dance would fit in her life as an adult.  She eventually started taking ballroom classes but found that she needed a little more spice.  They advertised salsa classes at a local restaurant and she fell in love on day 1. Her first dance style was LA style salsa. After several years of classes, she found a deeper appreciation for latin dance (salsa, bachata, merengue, and cha cha). Dance became her therapy when her best friend passed and when she became the sole caregiver of her father. She found that partner dancing was her getaway. When she traveled to New York, her first visit was to Eddie Torres’ studio. After that, she transitioned to New York style salsa. She found a love for Afro Cuban movements so she would train at the Masacote Retreats in Maine because it focused on music training and movement.

She travels all over the world to train and believes in continual training as a social dancer and as an instructor. Dancing and teaching require 2 different competencies. She is pivotal in the North Florida latin dance community.

Miriam founded  Tallahassee Salsa Dancers dance team (salsa, bachata, cha cha dance teams) in 2012. She is the founder and organizer of Tallahassee Latin Dance Festival.    In 2013, she opened Studio D so that the community would have a studio for street style latin dance programs. She is certified as a Santo Rico Dance Instructor  in all levels. She also operates an Island Touch dance franchise in Tallahassee called Tallahassee Touch. She has been a featured instructor and performer at Latin Dance Festivals in the US in both salsa, bachata, and cha cha. Although she could travel more, her ultimate goal is to train and build her Tallahassee community. She is community focused. Since she has always either played an instrument or danced, her specialty is teaching students how to connect to the music while dancing. 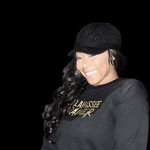 Brandy is a Fitness Dance instructor who specialize in Zumba, Hip Hop, and Twerk.  She attended FAMU and dance and model professionally in college. She has been instructing for 6 years and comes up with her own choreography. She’s a wife and a mother of 3 so this is her way of letting loose. She helps women get their sexy because she knows how hard it is especially being a naturally curvy woman herself.

Studio D is Tallahassee’s dance destination specializing in dance classes and social events that strive to fill up your passport for dance activities. Our goal is to unite the latin dance community by providing a place for dance classes, dance education, social dance events, and family fun. We help you stay active while you forget about working out. It doesn’t feel like a work out task to complete when you are dancing. You dance, stay fit, and have fun in the process.